Pass on the KFC Double Down, here's a real Heart Attack 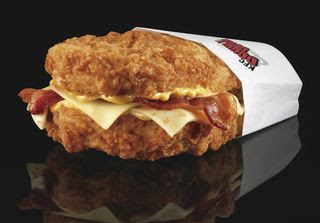 The KFC Double Down comprises of two fried fillet chicken fillets sandwiching slabs of bacon,  Monterey Jack and pepperjack cheese.  That's right, there isn't bread on that sandwich.  It's chicken and chicken.

The new KFC Double Down has not only been linked to me several times by friends, but I've also seen it  continuously on various food journals, blogs, and even an article by NYTimes' food critic Sam Sifton.  In the media, there is concern about the never ending problem of obesity (32g fat, 540 calories, 1,380mg sodium per sandwich), but for the rest of America, it's mostly excitement about this chicken greasefest of a sandwich.

Check this beauty out: 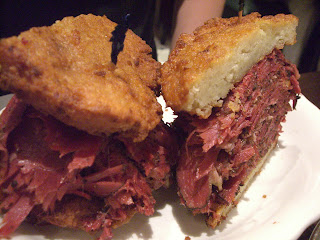 The Heart Attack at 2nd Ave Deli.  Layers upon layers of pastrami or corned beef sandwiched between two fat potato pancakes.  The whole sandwich is thicker than my fist!  It puts the KFC Double Down to shame!

If I'm going to clog up my arteries, I'm going to save it for special occasions with my favorite NY Kosher Deli.  As a side note, 2nd Ave Deli is not on 2nd Ave as you would expect.  It shut down a few years ago due to family business complications, but it has reopened and ready to serve on E 33rd St and Lexington Ave.

KFC's Double Down is scheduled to be released upon the masses of America tomorrow, April 12th.