You know what they say, once you go jack, you never go back.
Elaine Chow, the witty and well-seasoned editor of Shanghaiist.com will be gracing Gastronommy with guest contributions from her post in China. -Victoria

On Jackfruit
by Elaine Chow

It always amazes me the amount of fruit I come across in Asia that I've never seen anywhere else. You'd think that for someone who's lived in China, Hong Kong and Singapore for the good part of two decades, there'd be no fruity surprises left. And yet, I was schooled this year by a new roommate, who upon arriving in Shanghai, picked up the weirdest fruits he could find at a local market, and then became promptly addicted to them. His most prevalent fruit of choice: The Jackfruit.

The Jackfruit looks like a durian the size of a prize watermelon: spiky and green and with a girth that makes you wonder how many people get killed by errant falling fruits in its native country. According to Wikipedia, its the national fruit of Bangladesh and tends to do well in tropical lowlands. I guess there's enough of a market for it here in the slightly higher regions of Shanghai, though I really don't know why.

Interestingly, while the flesh is apparently edible (when ripened), the only part my roommate ever seemed to eat were the seeds. Perhaps he didn't know. Getting to the seeds requires that you hack away the unedible skin, which then leaves a waxy residue that gets all over your kitchen and is extremely hard to wash out. Also extremely hard to wash out: the scent. While it's not as noxiously odorous as durians are, jackfruit does have a sweet but sickly smell that could permeate and flavor other foods in your fridge. So let this be a warning: keep that stuff tightly wrapped unless you want all your milk, mushrooms and bread to taste slightly of jackfruit.

Speaking of which, what does jackfruit taste like? Like a banana if you dialed down the sugar and crossed it with hints of mango... and then added the texture of barely cooked chicken. No, that's not the most appetizing description - but jackfruit's not exactly the most appetizing of fruits. 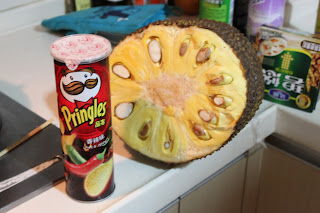 Or maybe I just think so because after week after week of our poor kitchen reeking of something akin to rotting papaya, I couldn't muster up any enthusiasm for the fruit anymore. Research shows that when you take the pains to cook it, it can develop a nice, roasted chestnutty flavor. I don't know: we never tried, and thanks to our roommate - who's now left - we never will.


Elaine Chow is the current editor of Shanghaiist.com, an English-language website about China covering local news, events, food and entertainment. When not blogging, she spends her time studying urban sustainability and helping out charitable efforts around town. And drinking. Lots of drinking. Elaine has previously written for Gizmodo, the gadget website. She can be found on tumblr and twitter.

Before I begin, first watch this video about the unusual parasitic fungus: The Cordyceps Fungus

Fungus eating is hardly a new idea in any part of the world.  Some, like the Alba white truffle even cost top dollar (easily USD$1,000+ per pound in season), despite that it is essentially just a delicious dirt-covered fungus found by pigs and dogs.  Cordyceps, as you've just seen in the video, are an unusual parasitic fungus that brain wash insects before growing out of their heads--I hope to never see the day where there is a human equivalent.

These fungi are also eaten by humans.  In China (it just had to be China), a certain type of cordyceps is prized for their medicinal properties.  The Caterpillar Cordyceps (Cordyceps Sinensis), grown from the infested bodies of the moth caterpillar, was once only available to Chinese Royalty.  But these days, you and everyone else can get your own little bottle of Caterpillar Cordyceps to ingest at home! 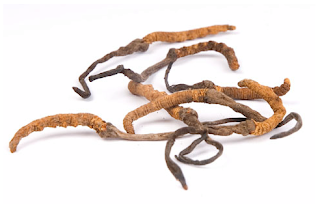 The most prized of Caterpillar Codyceps are found wild on the Tibetan plateau and gained some international notoriety when two Chinese athletes beat three world records at a track and field competition in 1993.  One of the main herb and food supplements they took to increase their stamina was Cordyceps.  Considered an herb, Cordyceps supposedly enhances the immune system, strengthens the lungs against asthma, fortifies kidneys and increases "sexual vitality" (according to reputable Eu Yan Sang).

Cordyceps can be ingested in pill form or double-boiled in water as a drink.  Alternatively, you can create a meal out of it and double-boil Cordyceps with duck meat or chicken, Chinese wolfberries and red dates.  -- A classic Chinese soup.

For those who can understand Chinese and want to know more, you may find this video useful.