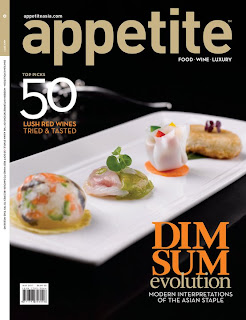 Appetite's most recent issue contains a hilarious tongue-in-cheek article by my friend and colleague, Kenny Leong.  I know few, if any, writers in Singapore who can weave words about wine like he does.  Here is his advice on becoming a wine critic.


On Becoming A Wine Critic
Unleash your inner Robert Parker by following these simple steps.
by Kenny Leong

Even as a food and wine writer myself, I do read wine reviews and wonder if the reviewer(s) might have had a little too much to drink. But I think we can all agree on one thing — deep down, we all want to be influential wine critics who can pontificate on any wine and capture the world’s attention. We have a mini Robert Parker lurking in all of us. We all want to be able to describe wine with fancy jargon and impress the girls (and the general crowd).

Of course, the easiest, quickest and simplest way to becoming a wine critic is just a click away. Go on Google and you can find enough information on any wine to share over a boring social dinner. But anyone can regurgitate information. And what if the information is wrong? After all, the Internet is a platform for people to write things without having to support it with hard evidence. A platform for every opinion potentially to be taken as gospel truth. A platform, in other words, to end all truth.

So. Spewing information taken off a technical fact sheet will make you an absolute bore, and the Internet is potentially hazardous to your credibility. What to do? The solution is simple — become your own maverick wine critic. Do what wine writers sometimes seem to be doing. Describe your mother-in-law, your neighbour’s pet, or that alluring person seated opposite you.

Have you just been served a Sauvignon Blanc? Swirl the glass, stick your nose right in, take a deep whiff, sip, and pontificate. The trick here is to say it with unwavering confidence and just that right amount of snobbery. “A little green, a little thin. Some cat’s pee, too. Oh but it has balls of steel, maybe due to it being fermented in stainless steel tanks. Dry and linear, kinda boring. Very acidic, too.” Then study the looks on the faces of your fellow diners. It’ll be priceless.

Let’s try another wine. Suppose you’ve been served a Chardonnay, the wine that, until recently, was fashionable to hate. With ceremonious, purposeful motion, do the necessary: Swirl, sniff, sip and swallow (it is generally considered inappropriate to expel your wine at dinner). Then solemnly declare: “Big. Round. Flinty. A little fat, I think. And somewhat nutty.”

If the lady seated opposite you is beautiful, tanned, attractive and eloquent, you’re in luck. There is so much you can say about the Riesling. “Very perfumed, floral and elegant. I see that it’s also nicely balanced, nuanced, composed, delicate, restrained and nicely framed. Very sexy.” Remember to wink.
Now, the same method applies for reds. Just remember that a Pinot Noir is less dense than a Merlot, which is less dense than a Cabernet Sauvignon. If there’s an unfamiliar wine and you’re stumped, just refuse the drink.

But a good wine critic should never refuse a drink. So maybe think of something we’re all familiar with, and something we all enjoy. Say, our own best friend. “A little fruity. And it wears a perfume of heady spice. Rich, sensual, and a little fleshy. I’m associating it with tobacco and dark chocolate. This must be very popular and likeable.” If it’s a Pinot Noir, think of your wife. “Wow! Sensual, smooth, elegant, and soft. Wears a perfume of exotic fruit. I am thinking plum, raspberry and a touch of spice. This is all about texture and finesse. Very refined and delicate. Truly deserving of all my attention.”

And if it’s a Cabernet Sauvignon you’re drinking, think of the one who helped you when you were down. “I sense incredible structure and power. It’s bold and strong, like a pillar. Supple, vibrant and energetic. I think this can handle a lot of situations.”

And there you have it. You are now an official maverick wine critic. The only thing left to do is to start a wine blog. Then you’re set to capture the world’s attention.

(APPETITE magazine, May 2011 - Subscribe here to see the rest of Appetite's contents)