What to eat in New York City (Part I)

I'm helping out some friends in their upcoming venue and have been asked to assist in some aspects as a F&B consultant.  One of these friends also happens to be flying to New York tonight and has asked for "THE list" of places for him to eat during his one week stay.  I've done as such, catering the list specifically for his tastes and potential inspiration for his upcoming venue here in Asia.

I've decided to share the e-mail here (with some edits to keep a certain level of privacy and have added photos), so I can simply send a link to any friends traveling to New York.  This list mostly limited to just the Lower East Side, Greenwich Village and the East Village and to certain comfort foods.  One or two of the listed places are stated more for the interior design rather than the food, per request of my friend. 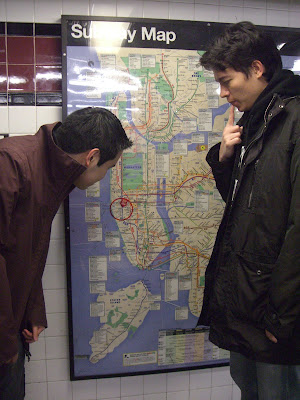 So with what you said in mind, I'll start off with some joints you might want to try.


Back Forty: Gastropub fare without being overly British.  Notice the grass-fed burger and especially their Stout Float.

The Spotted Pig: menu is a bit weird, but notice the interior.  Not suggesting you paint the walls pink and put pigs everywhere, but the 2nd floor has a very unique charm.  Artsy but not snobby, casual but not careless, fun and playful but mature.  Also try the chicken liver pate and deviled eggs.  They do it well here.  The rest is meh. 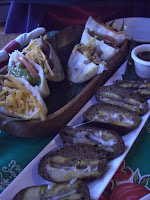 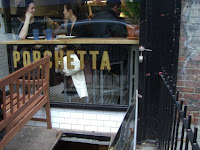 Porchetta:  Tiny little joint in the East Village run by a young Italian with slicked back jet black hair.  Try the porchetta sandwich. 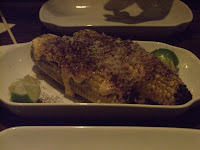 Kampuchea: It's Cambodian/Vietnamese, but if your chef is including Asian items on the menu, I suggest a visit to Kampuchea.  Ignore the noodles (despite kampuchea being called a noodle bar) You MUST try the sweet corn with their special toppings.  TRY IT!  YOU MUST!!!!!  In fact, eat two orders of that for me.  The crispy pork belly appetizer is also quite delicious.  The Numpang is great--love the baguettes they use too.  I like the general feel of the place.  Cozy, casual, open kitchen, and you know it's quality. 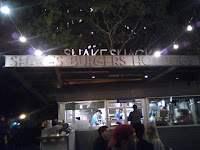 Shake Shack: The ultimate classic backyard grilled feel burger.  Not fussy and just straight to the point.  And yes, definitely get a milkshake.  There are two locations currently.. I've only been to the Madison Park location, but the other one is definitely closer to your apt (and it's indoors).

Little Owl: Meatball slider appetizer.  Don't bother staying for the rest.. and yes, it's worth going simply for the slider.  (It's in the West Village, so it's close to Blue Note) 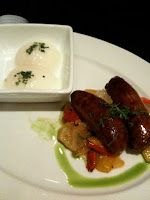 DBGB: New place by Daniel Boulud, play on CBGB (the old live music venue that has pumped out a lot of famous present day rockers).  Interior is quite interesting.  Slightly industrial, but also sophisticated.  It's a cool balance..  As for food, Daniel Boulud does good with the sausages.  Get one of those. 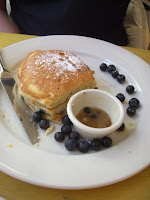 Clinton Street Bakery: OMGWTFBBQSAUCEAWESOME Blueberry pancakes.  All of their brunch items in general are great... but oh man, do I love their pancakes!  I say eat the eggs benedict at Sarabeth's (they do a great eggs benedict) and save the pancakes for Clinton Street.  You can come back and tell me how kickass the syrup is too.  Their biscuits are just about perfect too.  Tip: Don't go on a weekend.  You'll never get a table. 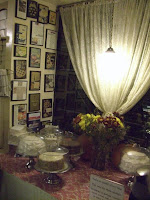 Magnolia Bakery:  Try a cupcake just to have been there done that (whether it's their original or red velvet, I'm going to leave that tough decision up to you).  But the real star at Magnolia is actually the banana pudding.  Go ahead and get a large. 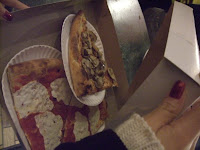 Joe's Pizza: Spiderman was filmed here, dude!  You know in the first movie when Peter Parker has a pizza delivery boy job and ends up getting fired from?  This is the place!  Well, actually the original film location was down the block and Joe's has since moved a couple doors down.. Anyway, get the fresh mozzarella slice.  You want to keep it simple here.  It's yum.  John's is around the corner on Bleeker, also quite famous.. but you can't order by the slice.  Pies only. 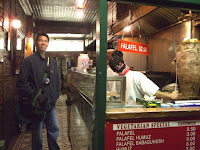 Yatagan Kebab House: Doner kebab.  YUM-MY.  Open until late night and also very close to Blue Note.  Blue Note food is absolute shit, so save your stomach for supper at Yatagan or Joe's. 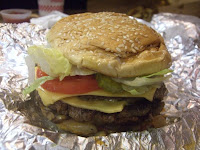 Five Guys: There's a location right in the West Village too.  Five Guys is a burger chain from DC.  I personally think it rocks In-N-Out's socks off, but many Californians beg to differ.  Not the end of the world if you miss out on Five Guys though... as long as you go to Shake Shack! 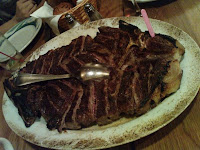 Peter Luger:  If you want to spend a little more moola, you know you gotta go to this legendary New York steakhouse.  Stick to the porterhouse and bacon (yes, bacon--get it!).  Forgeddabout the rest.  Don't you dare get it anything beyond medium rare.  You want this one bloody.  Daytime reservations aren't too tough.  Alternatively, Wolfgang Steakhouse is right in midtown Manhattan.  It has been compared to the likes of Peter Luger's porterhouse.  (Wolfgang used to work at Luger before opening his own joint back in the day) 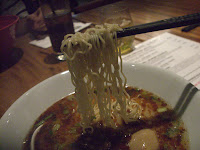 Ippudo:  Just to compare to Singapore's.  It bothers me that Ippudo Singapore sucks when Ippudo NY is so good haha.  Yummy ramen. 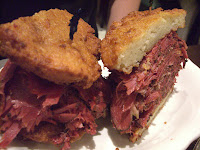 2nd Ave Deli: pastrami on rye, mushroom barely soup, potato pancake.  awesome.  If it's too out of the way (it's midtown east and NOT on 2nd Avenue as you'd expect) then just go for the same at Katz' Deli in the Lower East Side.  Very close to Mercury Lounge.  A lot of history at Katz' too, I just happen to think 2nd Ave is the best Jewish Deli in NYC. (More on 2nd Ave Deli) 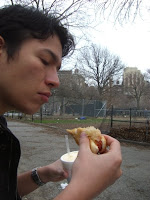 Gray's Papaya: The classic New York hotdog.  The papaya drink is absolutely horrid by the way.
Crif Dog: taking hotdogs to another level.  Also another late night spot.
Co. :  As in "company."  Pizza place.  A little different than the usual pizza.
Pommes Frites: Belgium fries with all sorts of different sauces to choose from.  Late night munchie paradise.

Drinks:
Check out these joints for top notch mixology without any door policy or stuffy attitudes:
B Flat
Angel's Share
Pegu

I can keep going on and on and on.. but this should be more than enough choices for now!  Let me know if there's a certain cuisine or dish you want to try that I didn't mention either.  Korean, Japanese, Northern Italian, Mediterranean, bagels, mac&cheese, French, fine dining etc

Most definitely let me know which places you end up going to.  Happy eating!  Wish I was there to eat through NY too :)

I can actually remember who I went with for the first time to each of these places.  If you were one of them and you remember too, then I thank you for sharing my first experience there with me!  I've been to each of those places many times over! 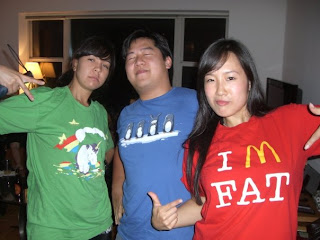 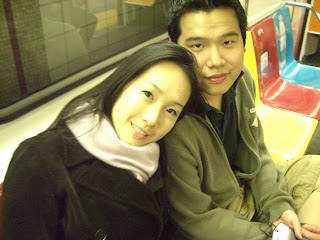 Me and Duke on the S train