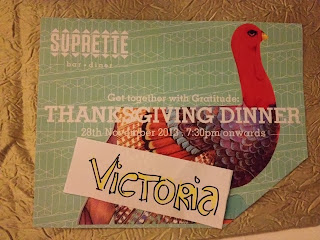 We went to Suprette this Thanksgiving in Singapore since no one had time to cook — we're saving that part for the weekend.  The food completely hit the spot and we left with full bellies. Hope your Thanksgiving was just as gluttonous, surrounded by good company! 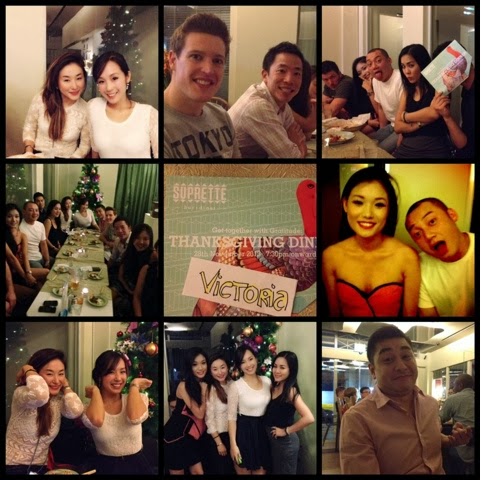 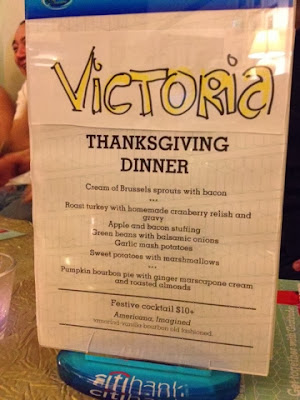 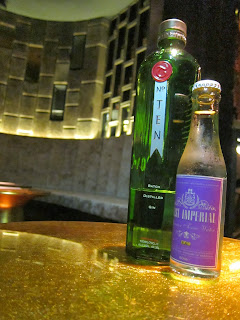 Thanks Denise of AKA Asia, Hannah Waters of Diageo, and Kevin Law Smith of East Imperial, for the fun Monday night "Gin Ramble". We flit from bar to bar around Singapore, tasting the finalist drinks for the East Imperial Gin Jubilee competition. Key ingredients: Tanqueray No. TEN and East Imperial tonic. 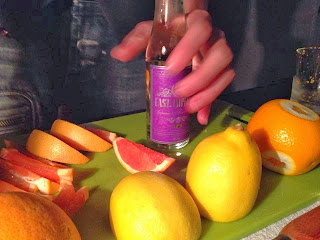 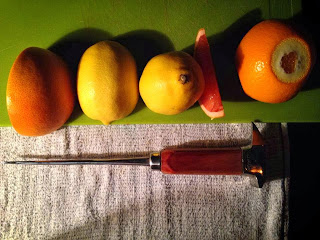 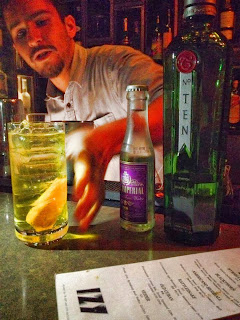 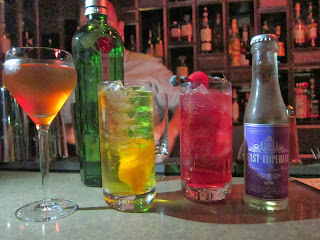 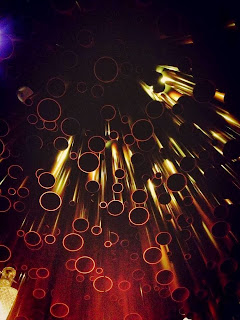 Ceiling motif in Cache at Izy 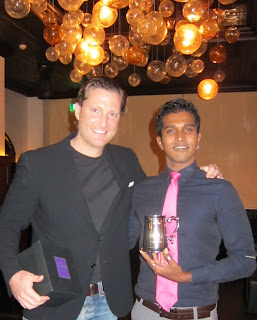 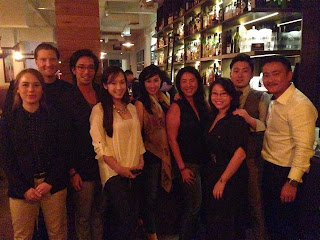 I'm not an advocate of emotional eating. Unless that emotion is happiness, you shouldn't be using food as a way to temper your mood. So instead of destroying your body with mindless eating, tickle your endorphins with physical activity. A good workout in form of sport or exercise does wonders (other options may include aggressive retail therapy—on foot, not online—or even sex).

Earlier this afternoon, my rage levels were cranked up to high levels. My trainer, Alvin at Lifestyle Fitness sensed my frustration, and like any sensible person who has to deal with an unhappy Victoria, threw me into work for a solid 30 minutes. My aggression and bad mood seemed to disappear with the sweat over this crazy thing: 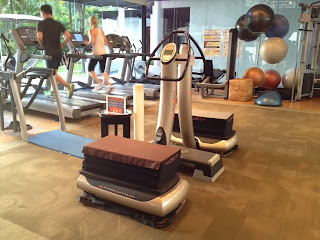 The Vibrogym looks harmless, but I can assure you that your body will thank you for the good workout and resulting tight derrière. (related: Getting in Shape as a Food Writer)

Anything But Hogwash
by Jonathan Toyad (guest writer) 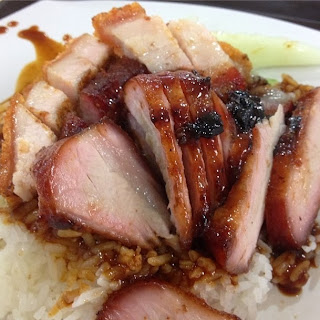 From few bus stops away from the Lorong Chuan or Serangoon MRT lies this tucked-away temple of brunch and lunch treasure: the Kim Heng HK Roasted Meat hawker stall. As you wait patiently in line at the enclosure just opposite the Serangoon Stadium, you start to gaze predominantly at the slabs and lines of tender juicy pork chunks. These chunks of divine taste, when stared upon, can make you reminisce of an innocent time when your parents used to buy pieces of giant Hong Kong-styled roast meat from lord-knows-what hawker god bestowed onto them.

Upon ordering the usual char siew rice platter -or with additional siobak if you're saying "to hell with carbs today"- a union of ginger, sweet sauce, succulent fat and crisp texture hit your taste buds as hard as one of Muhammad Ali's greatest hits. Yes, there is fowl play involved in the form of the hanging roast ducks you can order, but the real star is the lord roast pig offered to the patient bystanders with their eyes gleaming as the stare through the glass window. 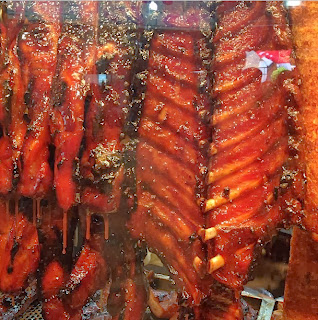 Just think of all the times you wished that the fake pieces of char siew from mediocre wanton stalls were fattened up and glistened like a prayer answered. Kim Heng HK is that divine wish realized in hawker gourmet form that is also easy on a foodie’s wallet too; your single serving of rice and meat comes at S$3 and not beyond S$5 if you want the extra goody goods. A word of caution: when you order extra rice to go with your meats, make sure you order more for the latter. The lovely people making the magic happen at Kim Heng aren't versed in the art of perfecting rice portions to coincide with the savories, talented as they are.

There's a kind of reward you get if you can muster waking up early and getting in line before or during the lunch crowd sets in. Sure, the stall is open until 7pm, but the good fresh roasted bits of slain livestock aren't so juicy by then. And really, filling yourself up with scrumptious combinations of char siew and siobak has its own reward. The kind you want to keep receiving for eternity if it weren't for the limitations of our mortal coils.

Amy Van and Chris Tan have been so kind as to allow Gastronommy to publish some of the recipes from their book, Chinese Heritage Cooking, for you to try out at home. The second recipe to be presented will be the classic Fried Prawns with Black Sauce. (For previous recipes, see Steamed Radish Cake, Sweet and Sour Pork, and Chinese Steamed Whole Fish.) 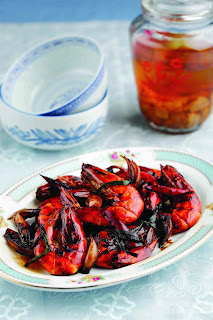 Fried Prawns With Black SauceServes 3–4
This dish reflects the purity of the Cantonese approach to cuisine—find the best ingredients and bring out their essential flavour with light cooking. This classic homestyle dish should be made with the freshest prawns (shrimps) you can get; dry-frying them as an initial step turns them deep red and enhances their aroma. Do use lard if you have it available, as it gives the prawns a special fragrance.
Fresh big prawns (shrimps) 500 g (1 lb 11/2 oz), about 10–12 prawnsSalt 1 tspCold water 500 ml (16 fl oz / 2 cups)Liquid lard (page 32) or peanut oil 2 TbspSugar 1 tspSpring onion (scallion) 1, cut into 4-cm (11/2-in) lengthsGinger 3 slicesRed chilli 1, deseeded and cut into thin stripsPurple onion 1/2, small, peeled and cut into thin wedgesSuperior dark soy sauce 1 TbspSesame oil 1/4 tspShaoxing rice wine 1 Tbsp

1. Wash prawns well. With kitchen scissors, snip off all their legs and trim off the sharp points on their heads.
2. Combine salt with cold water in a bowl and stir to dissolve. Add prawns to bowl, cover and chill for 30 minutes. This step gives the prawns a firmer texture. Just before you start cooking, drain prawns well and pat dry with paper towels.
3. Heat a well-seasoned wok over medium-high heat. Place prawns in wok, spacing them out evenly. Let fry undisturbed for 45–60 seconds, then flip over each prawn and fry for 45 seconds more. Prawns will be nearly cooked through and browned at the edges. Transfer prawns to a plate.
4. Add lard or oil and sugar to the wok and let sugar melt and caramelise to a pale brown, stirring once or twice. This will only take a few seconds.
5. Add spring onion, ginger, chilli and onion to wok and stir-fry for 30 seconds. Add prawns and stir-fry for 30 seconds more. Add dark soy sauce and sesame oil and fry briskly for 20 seconds, until prawns are well coated with the sauce.
6. Drizzle in rice wine around the edge of the wok, fry for a final 5 seconds and dish up. Serve immediately.

Remember when I shared that awful story of the couple who ignorantly threw out fresh truffles from their plate?  It became inspiration for one of my monthly Esquire MaHB columns (October 2013).  Thanks for that! 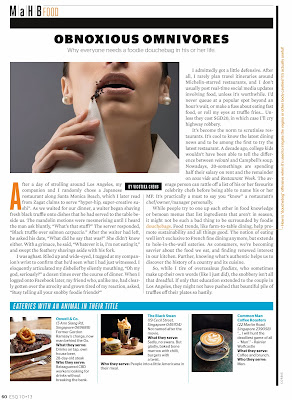