All in a day's work: Do Food Writers tire of food?

Most of the time, people gush how awesome it must be to eat great food
every single day (firstly, it's not always great; secondly, it's not
every day; third, Appetite magazine nor Gastronommy are focused on
only reviewing restaurants--I try to be more 3-dimensional than that).
But occasionally, someone will ask me, "Isn't it terrible?  Doesn't
it make eating less enjoyable because you're forced to do it as a
job?"

To answer that question...
There's something inherently wrong about calling it "terrible". We can
all think of at least a hundred worse job-requirements.  As for
eating, it doesn't make food any less appealing.  But I AM
getting sick of restaurants... then being watched expectantly, as
whoever I'm eating with waits and hopes for me to verbally pick apart
the meal.*
*edit: I should clarify that it is mostly the latter bit that I am sick of--the pretension of it all.  I suppose that's the price I have to pay when I "went to the dark side," as one chef friend put it.
And when I wrote this, I had just experienced weeks of restaurants that were mediocre at best.  I was getting jaded with Singapore's minuscule (but growing) Western dining scene.  I'm warming back up to it though.

I recently told Adrian (whom I've affectionately named my
unpretentious FoodNoob), if somehow he plans to take me out between
our impossibly busy schedules, PLEASE don't take me to a nice
restaurant in Singapore. I swear that was the biggest grin I got from him that
day--he was thrilled to hear it for a good number of reasons.

On multiple occasions, my FoodNoob has wondered aloud why I would date
him instead of some fellow food-enthusiast.  I'll tell you why: I
actually don't enjoy verbally dissecting food or one-upping each other
in who got to meet the latest greatest celebrity chef every last
minute of my day. Some self-confessed foodies drive me nuts--they're too over the top and try too hard to pick out what's not there. Multiple
hobbies are a good thing, people!

With all that said, don't get me wrong. I do discuss food and I still
and will always get excited about ongoings in the industry. And I always will love to
noms.

As a side thought, why did no one ever ask me that when I was in F&B
back in Hong Kong?  Man, was I tired of burgers and pasta for a good
two years after I started those projects. 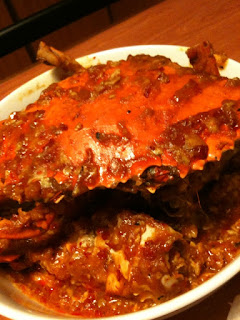 I've never eaten chili crab at home before and I've certainly never eaten chili crab alone.  Tonight, I pulled out an entire chili crab left over from my Red House dinner tasting last night.  It felt strange at first--almost pitiful.  Here I was on a Friday night of Formula1 weekend with plans having fallen through, eating left over chili crab by myself.  My plentiful chili crab experiences beforehand always meant company with good friends and family, so crabs seemed like something that always ought to be shared.  But I went ahead, warmed it up and set it on the table.

Eating chili crab at home by myself ended up being the best experience I've had all week.  It was the silence of my kitchen, the unabashed use of all ten fingers, and taking the last claw absolutely guilt free... It had a remarkably calming effect.

It has been the only time in a while that I've truly had time to myself, away from people, phones and the computer.  And I was glad I could share it alone with this crab.

Edward Kwon, The Spice, and some notes on the future of cuisine in Korea [by Guest Contributor]


Edward Kwon is, apparently, South Korea’s answer to the celebrity chef phenomenon. After working his way up at some of Seoul’s best international hotels, Kwon held high level positions at both California’s Ritz Carlton Half Moon Bay and the Sheraton Tianjin, China before landing in Dubai, where he was eventually named executive chef at the Burj Al Arab Hotel, one of the world’s few “7-star” luxury hotel complexes. Kwon recently returned to Seoul, and somehow, in the midst of a flurry of press conferences, culinary ambassadorships, book signings, and TV programs, has found the time to open The Spice, as well as the more casual Eddy’s Café concept. At 40 years old, he has all the ostensible markings of a rising celeb chef – a book, TV experience, international pedigree, and a camera-ready smile that belies his age, not to mention the now-seemingly-requisite colorful tattoos that peek out from under his shirtsleeves. Seeking the quintessential Kwon experience, I reserved a dinner date at his flagship, The Spice – located near Seoul’s multi-cultural Itaewon neighborhood – as my introduction to the Kwon experience.

And after you wander up to the small, shimmering office building that houses the restaurant, yank open its unnecessarily giant first floor doors, and waltz into The Spice, it is precisely Kwon himself that you experience – larger than life, in the form of a roughly 6-foot tall portrait of the chef – hung from the ceiling, near the center of restaurant, parallel to the floor, smiling upon his patrons, arms crossed, garbed in a short-sleeved chef’s jacket. Beyond the unwieldy doors and Saint Kwon’s mammoth grin, gaudy décor continues to unfold. As if the Queen of Hearts helmed the design team, the interior palette is essentially restricted to red, white, and black. Seating is either in plush semicircular booths or on uncomfortable molded-plastic chairs at too-small tables for two. Glossy plastic chandeliers hang far above the tables, interrupted not only by Kwon’s likeness, but also framed pop art prints from artists such as Roy Lichtenstein. And woven into bar counters, shelves, support columns, and the booth design is – wait for it – neon that slowly and continually fades from a bright white to a hellish red, and back again. Exceeding a fun pop-art theme, or even sleek “Asian” design, this is just how I imagine the worst nightclubs of Manhattan’s coke-fueled Wall Street era. The house music softly thumping during my dinner only reinforced this comparison. 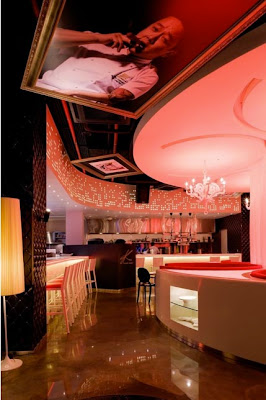 At the time of my dinner visit, The Spice offered four different prix fixe menus ranging from roughly USD$35-55. I opted for level three, the “Exclusive,” featuring five courses. It needs emphasized here that the pricing at Kwon’s establishments might be his greatest contribution to Seoul’s fine-dining scene, where luxury and international haute cuisine has long been associated with exorbitant prices that often obscure questionable quality. This attitude can be seen in various bios of the chef, many of which make it a point to note that a Kwon-cooked tasting menu at the Burj Al Arab might cost as much as USD $3500. It is entirely feasible that Kwon could have brought that luxury-hotel type of approach with him to Seoul, but we should be thankful that he didn’t. Instead, his track record thus far highlights the accessibility the haute cuisine. This is accomplished not only through the affordable pricing at his restaurants, but also his stated desires to “globalize” Korean cuisine, and eventually open a “kibbutz-style” culinary school with attached farm. If these ideas can take root, they will do much to reorient the promotion and perception of Korean cuisine abroad.

The menu at The Spice is more of a “the world to Korea” type exercise than the other way around, featuring many staples of haute cuisine still uncommon in Seoul, including foie gras, sous vide chicken, velouté, and wagyu beef. My opener was a sweet medley of pan-seared foie with both grape jelly and strawberry reduction. Despite the small pieces of crunchy, toasted brioche that imparted a welcomed textural contrast, the dish played too heavily on the latter side of the savory/sweet dynamic, and felt more like a dessert. The eggplant “caviar” and porcini velouté that followed did a good job of squarely bringing me back to the world of the savory, though all of the ingredients held a similar light grey hue that was decidedly less than appetizing. The porcini also dominated the dish a bit too potently. 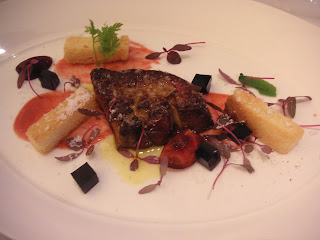 Then my worst fears were realized. Preface – squiggles of mayonnaise are a ubiquitous feature of newer Korean food, particularly Korean interpretations of “Western” cuisine. They make their way into the oddest places – on pizza, over fruit, mixed with corn, or covering mixed greens. The fresh-greens salad has never really held a place in traditional Korean cuisine, and when it was introduced and adopted, it was naturally accompanied by the idea of a dressing. I don’t possess the anthropological or historical data to discuss to why, but the end result of this “localization” of the green salad was a pile of lettuce and assorted veggies smothered in mayo. It was for this reason that I eyed my third course on The Spice’s menu – a mix of mizuna, friseé, and watercress topped with soft-boiled quail eggs, pancetta, edible flowers, and creamy truffle – with both hope and skepticism. Unfortunately, when the dish arrived, my dreams of crisp, unadulterated greenery were besmeared by what turned out to be a very lightly truffled and very heavy aioli – in other words – fancy, dense mayo. The pancetta was too crisp, and the eggs more hard- than soft-boiled. I had to abandon the dish halfway through.

What followed was arguably the best dish of the meal, a delectably tender piece of wagyu short rib in a soy-based sauce, with pomme soufflé, peas, and both spring and pearl onions. My only complaint would be that it was a bit heavily salted. But the flavors were popping, the onions were marvelous, and the beef nearly dissolved in my mouth. The meal ended with a small lemon olive oil cake dotted with a tart raspberry coulis, and accompanied by too-dry, too-crunchy meringues. While the cake and coulis was good enough, I wanted my foie gras dish back to end the meal. Foie as dessert is right down my alley, I discovered. 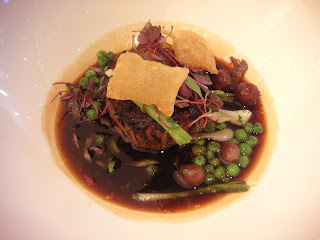 Overall, I was disappointed with my meal. The clubby atmosphere and slightly pretentious plating only aggravated this feeling. But I left feeling good. Why? Because despite the numerous technical flaws and flamboyant décor, I saw Edward Kwon’s vision, a larger plan, and I liked it. This vision stands in contrast to much of the nation’s official food-related promotional doctrine, which as the ZenKimchi Korean Food Journal recently argued, seems to feel that the only way to seriously enter the culinary world is to continue to charge hundreds of dollars for standard, street-level Korean fare placed in fancy pottery. Chef Kwon instead welcomes and indeed promotes the influence of classical European techniques and international experience. It is a similar process of fusion that has produced two of America’s most recognizable food trends of the last 5 years – David Chang’s Momofuku empire and Ray Choi’s Kogi food truck. The food at Edward Kwon’s establishments may still be a work a progress, but overall the dining experience leaves you with a sense of optimism regarding not only fine dining in Korea, but also the possible futures of Korean food abroad. 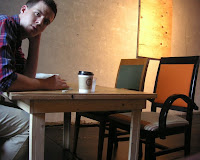