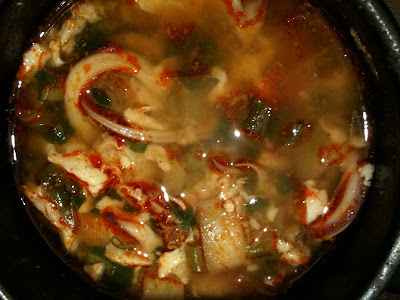 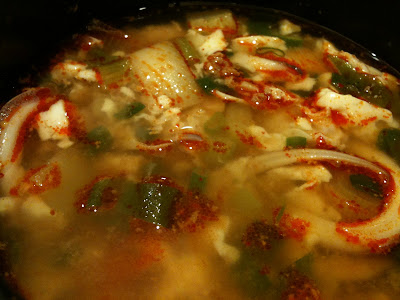 I was disappointed.  The Korean places here in are few and far between, and I have yet to find any decent place for sullung tang, naengmyun, sundubu, and even hamul pajun—even the terrible Miss restaurant in NY has better stuff!  I was excited to try this place again (my first visit for jajangmyun when they opened a few months ago wasn't bad), especially since the head chef is Korean.

When it landed on the table, I looked at it cautiously and a bit defensively, knowing that this watery mess was not sundubu.  And turns out, it tastes exactly what it looks like.

Never did I think I would see the day in which I would ask for salt at a Korean restaurant.

It was nothing more than tasteless broth with chili oil.  And let’s just say that the tofu was not “silken.”  It was marginally more edible once the waitress came back with the requested salt—I wonder why she or the chefs didn’t inquire worriedly as to why someone would even ask for salt in their sundubu.

I believe this is the first time I’ve made a post for the specific purpose of pointing out an atrocious meal.  My only defense for them is that the restaurant supposedly specializes in “Korean Charcoal BBQ”.  (though that hasn’t stopped other Korean BBQ restaurants from serving decent sundubu)  I’d be more accepting if the dish was still tasty, despite its lack of authenticity.  Sadly, not the case here.

The purpose of my complaint?  I honestly want them to improve.  The location is great and I’d love to have a Korean go-to spot nearby my home.  I’m not asking for much here.  I just want it to be slightly more than edible.  If not, then for pete’s sake, just take it off the menu!  I’d be ashamed as a Korean chef to be serving such indecency!

I didn’t demand a refund or had it sent back to the kitchen—not my style to be a fussy patron unless it was truly inedible.  And it clearly wasn’t a one time mistake since ’s ramen was suffering a similar fate.  When the bill came, I asked the non-Korean waitress where the chefs were from, why the sundubu tasted like funk, and then proceeded to explain what sundubu is actually supposed to be like.  Her only polite defense was the chef and his sous chef were both Korean… implying that they surely know what they’re doing.

I just hope the waitress spoke to the kitchen afterwards.