Yet another iPhone app for foodies is out.  The Scoop is a free New York iPhone app by the New York Times.  Included in this app is NYTimes restaurant critic, Sam Sifton’s “current 50 favorite restaurants in New York.”  The list will be updated periodically and also includes recommended bars (“The Top Shelf”).

I would have been more excited for an app like “Bruni’s Best” or “Frank’s Fifty” or “Reservations with Ruth.”  I’m not a big Sifton fan and if you can’t tell, I still miss Frank Bruni and Ruth Reichl big time. 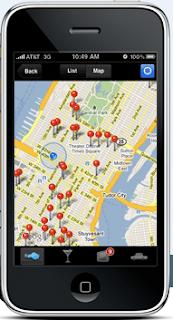 A list of favorites all boils down to personal taste, so I won’t bash too hard on Sifton's top 50 that I mostly disagree with.  But I will bash Sifton a writer.  He isn’t magical, and yes.. magic is exactly what I expect.  ex NYT critics Reichl and Bruni, in their own styles, weave masterpieces out of each and every review.  Whether or not I end up agreeing with their conclusions, they made food critiquing an art.  They helped make the NYTimes’ Dining & Wine section the standard for restaurant critiquing in the English speaking world.

Sam Sifton isn’t terrible nor do I hate the guy.  I just get frustrated how he observes and writes like any ol’ food writer.. blogger quality even.  There are times when I feel more inspired by articles on Serious Eats than NYT’s (not that Serious Eats writers are bad--in fact, I love them!  Again, I just hold NYT to god-like standards).  I don’t like how he’s so accessible with his food and exercise journals or interactivity with readers on social networks.  Save that stuff for an autobiography or his post-restaurant critic era.  I’m old fashioned and I only want to hear about the food!  Clearly, I like to put old school NYT’s writers on pedestals.