Never underestimate the power of cheese

Break into the vaults of Italian bank, Credito Emiliano, and you'll find over 400,000 wheels of parmigiano-reggiano.


Nestled in the valleys of the Emilia-Romagna region southeast of Milan, Credito Emiliano has been using parmesan as collateral since 1953, entrusting management of the cheese to a unit called Magazzini Generali delle Tagliate.

Mr. Bizzarri said the bank offered loans for as long as 24 months, equal to the time it takes the parmesan to age, at the euro interbank offered rate plus 0.75 percentage point to two percentage points. The bank gives producers as much as 80 percent of the value of the cheese, based on current market prices.

The bank accepts parmesan as collateral for loans, helping it to keep financing cheese makers in northern Italy even during the worst recession since World War II. Credito Emiliano’s two climate-controlled warehouses hold about 440,000 wheels worth €132 million, or $187.5 million.  (excerpt from New York Times)


Parmesan is far from the only cheese making bank.  One of my cheese favorites, Roquefort, is under a 300% import tariff.  You can thank Bush regime for that atrocity.  He imposed a 300% duty right before he left office almost a year ago in retaliation to a EU ban on US beef containing hormones (a preposterous increase from the already ridiculous 100% duty in 1999).    I was horrified when I found that out.  My beloved Roquefort!
When I'm overseas, I am sure to stuff up on the appropriately priced Roquefort.. however, last week I gave in and bought a little wedge of it to feast on at home.  Delish. 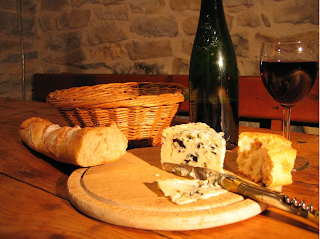 Give me a handful of dried figs and a wedge of roquefort on any given day, and I'll be happy.  Pair it with a Sauterne and I'm in heaven.  I love the rich nuttiness with a salty peppery bite.  A reigning champ in my personal top 3 cheese list.  The other two are fellow Frenchies, but I won't reveal those until later (dun dun dun...)