What Foodies Want For Christmas

Merry Christmas!  This holiday season, we asked nine notable individuals in the food and drink scene about what they want this Christmas.  Together with my buddy and fellow notatourist.sg culture editor, we spent a week hopping from spot to spot to see what they had to say.  Check out the photo story below. Photography by Adam Tun-Aung.  (Original article for notatourist.sg here) 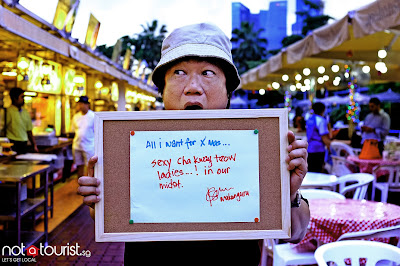 KF Seetoh, Founder, Makansutra
This makanguru is Singapore's champion of local street food (and a columnist at notatourist.sg).  What does Seetoh want for Christmas?  "Sexy cha kway teow ladies in our midst."  As if cha kway teow wasn't sinful enough. Guo Yi, Director of Operations, Jigger & Pony
Co-owner of one of Singapore's latest cocktail bars, Guo Yi wants a ticket back to Madrid to visit Michel Alessandro and Carlos Mureno. Co-owners Guo Yi and Indra Kantono met the hospitable duo one fateful evening in Spain. Alessandro and Mureno's warmth, kindness and great food and wine offerings inspired Guo Yi and Indra to open their own venue in Singapore. Guo Yi hopes to bring the same Spanish hospitality she experienced to her guests at Jigger & Pony. (Read here for more on Jigger & Pony) 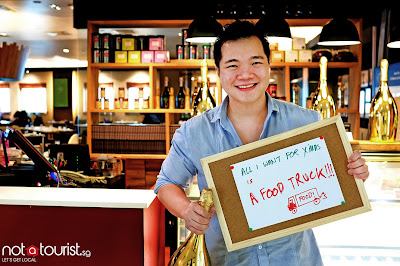 Nicholas Lin, Owner, Platypus Kitchen
Heavily influenced by the food culture while he was working in the United States, this consultant turned cookbook author and chef craves nothing more than the comfort of food truck goodness. 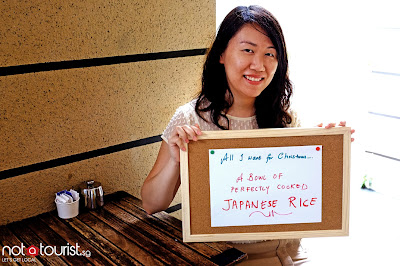 Amy Van, Editor, Appetite Magazine
Amy Van, editor of one of Singapore's most established food publications goes back to basics. But as we know in the food world, the simplest dishes can be the hardest to perfect. 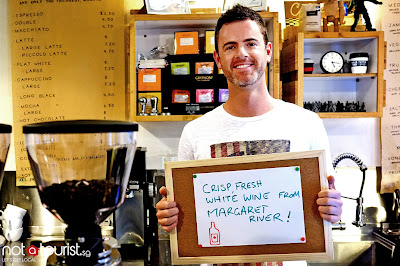 Harry Grover, Owner, Forty Hands and Broadcast HQ
It is often said that Forty Hands was the key in transforming the Tiong Bahru area into Singapore's latest hipster locale. This Australian-born barista is getting what he wants for Christmas. He flew off to Australia the next day after this shoot... and is now probably sipping his crisp, fresh white wine as you read this. 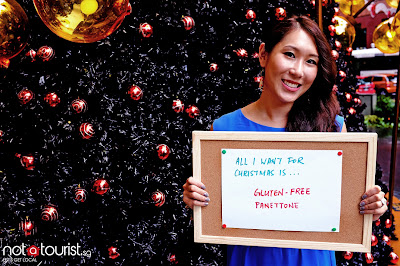 Yvonne Wang, Editor of The Muse, Communications Manager for TripAdvisor
Yvonne is an avid home cook (I can personally vouch for her amazing cooking), but has what may seem like the extra difficulty of living gluten-free. ”A gluten-free lifestyle can be challenging especially around the festive seasons. I want to raise awareness that there are great Christmas recipes that don’t contain gluten,” she says, confident that having a gluten-free holiday isn’t as daunting as it sounds. 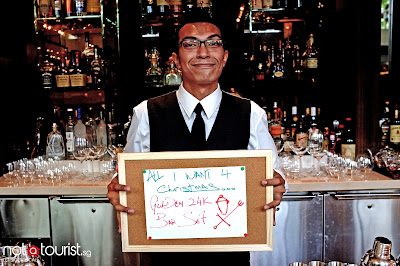 Mohd Irwan, Head Bartender, CUT by Wolfgang Puck
Trained in the Japanese-style of bartending, Irwan dedicates his life to the craft (he has the battle scars to prove it during his ice-carving and fresh ingredient handling). This Christmas, he wants a 24 karat gold Bar Set. And it's not just for the bling. He explains, "Gold tends to control the temperature better rather than stainless steel, so the temperature of the ingredients won't alter while stirring or shaking." 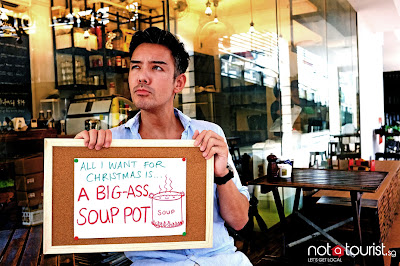 Jon Yongfook Cockle, Director, 24-12 Systems
Mr. Cockle, the man of many talents is also a contributor for notatourist.sg and has developed countless recipes for the public. “Big-ass soup pot” doesn’t quite capture the truth about the elegance of his cooking, so he elaborates, “I’ve been eating lots of Cantonese soup in the last half of 2012 and love it. I enjoy anything that’s cooked low and slow and I admire the purity of these soups – often there’s nothing more to it than a few fresh and dried ingredients (less than you’d think), water and time. I would love to be able to nail Cantonese-style ginseng chicken soup and pork rib / lotus root soup in 2013 to add to the several classic French soups I already have down pat. Although I’m a software entrepreneur, I do harbor fantasies about opening my own soup place one day!” We may see the revival of the Soup Nazi just yet. 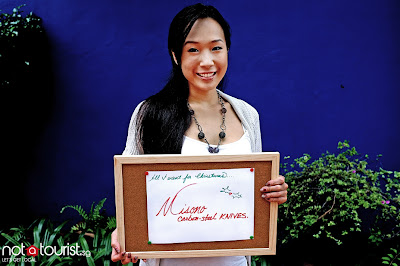 Victoria Cheng, Editor-in-chief of Notatourist.sg
Hey, it's me! Adam suggested that we include my photo in this series... When I moved to Singapore, I ended up selling most of my kitchen--an extremely heart-breaking process, might I add. This Christmas, I want to begin re-pimping out my kitchen, one cocotte at a time. But first, a Misono santouku knife would be a nice start. 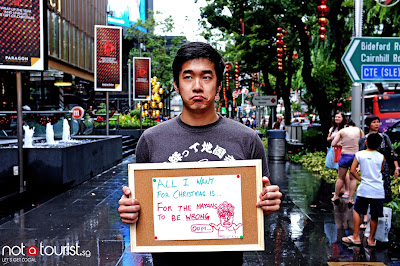 Norman Hartono
Norman's wish for Christmas: For the Mayans to be WRONG.  This photo was taken two days before the world was supposed to end and today is now Christmas.  Looks like he got what he wanted for Christmas! 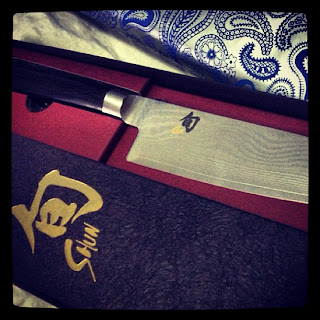 What I got for Christmas

As a follow up:
Christmas Eve morning, Norman presented me with this!  An 8" Shun Chef's Knife!  I hadn't even hit "Publish" for this article yet before getting this.  =)  It also looks like that most of us on this list have gotten what we wished for this holiday too!