It’s been about a month since I’ve officially moved to Singapore.  There has been some guesswork as to why:

Opening a new resto? No, not yet;
Full-time blogger? Never;
A certain live music venue investor? No, not financially invested anyway;
Got engaged? No lah!;
Freelance writing? Close, but no.

I was poking around  when I was visiting Singapore 2-3 months ago, casually feeling out what was out there and not quite expecting to actually move to the Lion City.  But somehow, someway, fate determined I should be here for now.  I love New York with all my heart—it was no easy task getting acclimated to Singapore the first 2ish weeks, considering how often I’ve visited this city the past.  I was terribly homesick for my life and friends back in Manhattan and Strong Island.  And I still miss New York, but I’m starting to settle into Singapore.  It helps that Singapore and Hong Kong are big destinations and my fellow jet setting friends visit often. 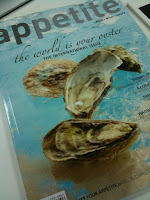 As for what I’m doing now, I’m on as a writer for Appetite Magazine.  I can actually distinctly remember my first experience with the magazine.  Two years ago when I was visiting Singapore, I was waiting at TCC for the ever-tardy Adrian and was presented with a selection of food magazines.  Appetite and Delicious out shined the other magazines with their beautiful covers and attractive photo spreads.  But as they say, never judge by its cover.  So I was soon pleased to find that the content held equally to the high standards of the photos and styling. I’ve recently come across the issue again while I was flipping through old copies: issue nineteen, August 2008 Appetite

I was pretty excited about the two magazines back then, even pointing them out to Adrian.  I was impressed (and admittedly surprised) to find out that Appetite was a home-grown magazine.  Two thumbs up!  From then on, I always found myself flipping through Appetite and Delicious whenever I was visiting Singapore and had time to myself. 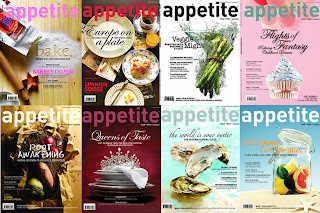 Fast forward two years.  Never did I consider that I would be brushing off dust from the ol’ journo degree and leaving F&B to write full-time!..especially for Appetite magazine.  (Sheesh, I feel sort of like LeBron… just going on and on with a one-hour special, when I could just say what I need to say in a one-liner update.)

As for Gastronommy, earlier this week, I received an email reminder asking whether or not I want to renew this domain.  Heck yes! But wow, has it really been only a year already?  I feel like I've been doing this for much longer!  And I mean that in the best way possible. 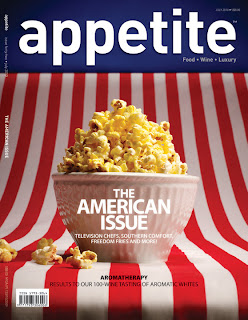 How appropriate that this July issue should be the first issue my articles appear in.

So Happy 1 Year to Gastronommy!  And Happy relaunch of Appetite!  Beginning September check out the new site at www.appetiteasia.com and check out the magazine’s new look on shelves soon.

On the question of conflict of interest...  I’d like to think that I have a few shreds of common sense and I try my best not to overlap anything and always put work first.  To reiterate this blog’s function, it serves as a personal journal of my food related travel, work, eat and play.  It serves a very different purpose than most publications.  The only real drawback is that I might not have as much time to regularly update for a while... but you can just grab a copy of Appetite from the shelves in the meantime!


To celebrate Gastronommy's first anniversary, here's a joke for you.
Why did Han Solo cry at the dinner table?
Because the meat was chewie.
(http://bit.ly/cFI02a)

As a reminder, at 1,000 Likes on facebook, there will be a gift giveaway to randomly selected fans!  Of course, I'd rather you "Like" the page because you actually feel some sort of fondness for Gastronommy than just for the freebies. :)