New kid on the block: OBAO

Previously a barren land of office buildings and common deli and coffee chains, this little area of midtown Manhattan seems to be growing its own little garden of restaurants.  And until now, midtown was severely lacking in the South East Asian cuisine department.  Chef Michael Huynh attempts to remedy this issue with his latest restaurant opening: OBAO. 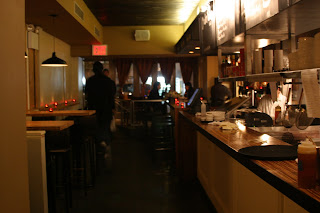 Like most Chinese people, I am very wary about Asian fusion cuisine, with maybe the exception of French-Japanese.  The menu is a South East Asian fusion with what seems to be a focus on Vietnamese dishes.  Michael Huynh puts a minor twist into popular Vietnamese, Thai, Singaporean, Malaysian and Cambodian staples, while still retaining their classic flavors. 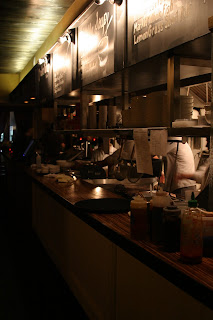 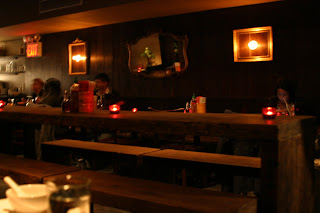 Initially, OBAO looks like a small modern café.  The waiter leads us past the open kitchen and into a slightly larger, dimly lit room with a dark wooden façade.  The long wooden center table and the tin cans full of chopsticks are decent attempts to appear more Vietnamese.  Visible through large glass doors, there is a garden in the back, but customers opt to stay inside during the chilly season.

I was eager to try the pork belly, but at 8pm on a relatively empty Tuesday night, it was already all sold out?  My eye wanders to the single Singaporean dish on the menu, curious and suspicious about their Laksa offering (green tea soba?  Interesting).  I have a feeling it will be a big disappointment as New York Singaporean food has always been less than fulfilling.  The papaya salad and Char Kway Teow are also tempting at first, but I am reminded that I am visiting Singapore and Thailand in less than a month.  We stick to the other options on the menu. 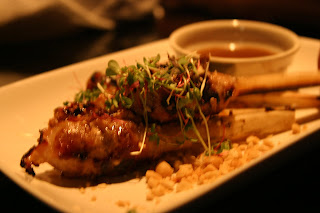 My friends and I settle for a two appetizers. We begin with Short Rib on Sugar Cane Skewer ($9), covered with a spicy honey mustard glaze.  The short ribs are tender and flavorful and I enjoy gnawing on the sugar cane afterwards. 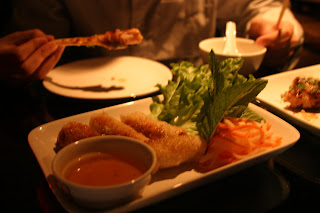 My friends, Brian and Eugene also have a hankering for the Crispy Spring Rolls ($7), filled with pork, shrimp and taro.  It’s pretty standard, but I’m satisfied with the crisp freshness.  It doesn’t taste like it was frozen just an hour ago. 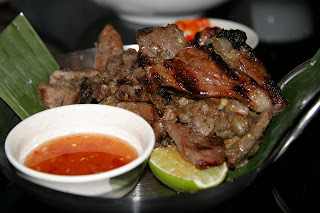 I order the Vietnamese Pork Chop ($14), perhaps a mistake.  I wouldn’t have many complaints if this was from a hole in the wall restaurant for half the price, but the meat was tough and the glaze was nothing out of the ordinary.  It came with white rice and sweet and sour sauce. 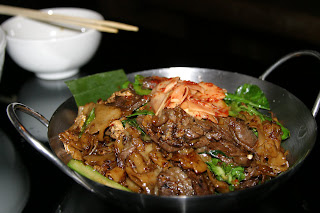 My friend orders the Pad See Iew ($10).  Pad see iew is one of my many favorite Thai dishes, especially when done right.  Here at OBAO, they have put a seemingly new twist on it, using Korean styled kalbi short ribs and “green mango kimchi.”  The pad see iew is not bad perhaps for a standard Americanized Thai restaurant, but it lacks the sweetened aftertaste that the Thai master all too well.  The green mango kimchi did go well with the dish, but don’t expect it to resemble anything like actual Korean (cabbage) kimchi. 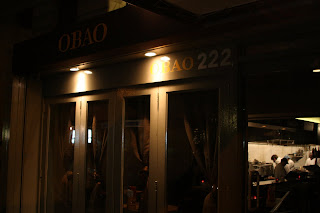 OBAO a sufficient option for those working or living in Midtown and can’t be bothered to travel down to the Lower East Side or Chinatown for the more tasty and cheaper selections of South East Asian cuisine.  As for those of you living downtown, I wouldn’t recommend making any special plans to try out OBAO.