Craving of the month: Kimbap 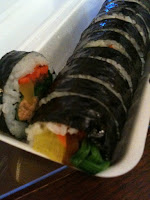 I never liked "korean sushi" as a little girl.  Why settle for a roll that reminded me of a more boring version of actual sushi or the already boring California rolls instead?  I often argued with my late friend, Augustine Kim about the faults of this "korean sushi."  He detests raw fish, while I found his desires for his native "sushi" to be silly.

Fast forward 15 years and you find me craving kimbap every week for the past month.  The first key is to not compare it to sushi, but as its own entity of bite sized goodies in rice.  I re-encountered the idea of trying them out when my friend, Veronica offered to bring homemade kimbap on our fishing trip earlier this summer.  Given my childhood unenthusiastic desire for the dish, I declined taking any pieces the entire trip until there were only three left in the tray.  Out of politeness I finally took one when she offered.  mmm..  yummy!  I turned to tell her how good they were and to reach for one more.

Photo by Matthew Won, from our Huntington fishing trip

MY GOSH, why did I wait?!  While I was thanking her for bringing them, she was already beginning to hand feed our friends the last two pieces while they were busy baiting (Mike Choi, Andrew Chen, I'm looking at you two).  Noooo..!

I wish I could tell you why I had the sudden turn-around regarding kimbap this past July, but alas I have yet to fully fathom it myself.  Instead, I will resort to telling you about my newest kimbap tastings tonight.

What is kimbap?
In case you are not familiar with kimbap, the basic kimbap comprises of various goodies rolled into white rice with an outside layer of roasted seaweed (the kim).  These goodies usually include julienned carrots, spinach sauteed in sesame oil, allumette cut pickled daikon radish (takuan), thinly sliced sirloin (bulgolgi), and maybe fish cakes (odeng).  No dipping sauce needed for the completed kimbap. 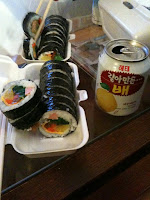 I had last minute dinner plans with my gigantic 6'7" friend, Brian.  I told him of my recent weekly cravings for kimbap.  There's something comforting about the little Korean nommies and I just love how easy they are to eat and clean up after.  More than a few times tonight, he mentioned how silly it was for us to actually go out and buy it when it is super easy to make at home.

And so, we had our kimbap.  At E-Mo, probably the best kimbap place I've had in my limited experience with it, Brian pointed out the cheese kimbap to me.  Strange!  ...but I suppose there are equally strange creations like the existence of the Boston Roll and those aren't so bad (bastardized sushi roll with smoked salmon and cream cheese).  It reminded me of recently hearing about Koreans putting cheese over their ramen.  Preposterous!  I am not sold on the idea and am further skeptical when he tells me they simply use average grocery store American cheese in the kimbap or over their ramen.  He's gushing about it at this point, so we add it to our order along with spicy tuna kimbap and spicy squid kimbap.

I like how E-Mo (meaning "aunt") adds miso soup to each order.  It's such a comforting pair to be nomming on in front of the TV.  Bulgolgi kimbap + Miso Soup + Milkis (carbonated yogurt drink) = ultimate comfort food (for the time being anyway).  And don't forget to munch on the slices of the bright yellow, refreshingly crunchy pickled radish that is usually included on the side. 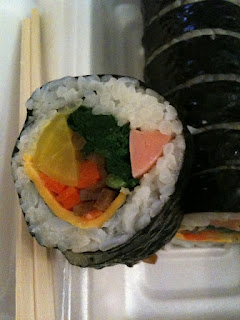 I first try the cheese kimbap.  Ugh.  It ended up being the first and last one I tried for tonight.  I could very well taste the processed American cheese, and I can't say I like it being combined with rice and seaweed.  Brian seems surprised by my adverse reaction, but he happily devours the rest.  I won't be seeking to try cheese covered ramen anytime soon. 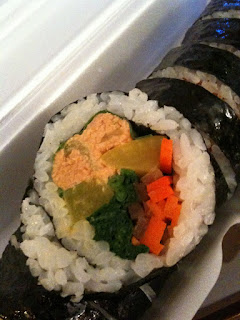 Next up, the spicy tuna.  I like the spicy kick, but the roll doesn't hit the spot like the good ol' bulgolgi kimbap usually does for me.  It tastes exactly what it looks like: a spicy mayonnaise tuna fish salad wrapped in rice and seaweed.  Perhaps I'm just not in the mood for tunafish tonight. 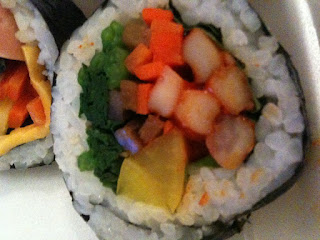 Finally, the spicy squid.  I remain focused on this roll for the rest of the meal.  A few chomps in, I perk up at an indescribable flavor.  It was definitely a result of some sort of herb or vegetable and its flavor was remarkably distinct.  Initially the texture and flavor profile reminds me of a cross between basil and mint leaves, but as I chew further, the taste leads into a slightly different direction.  What is this?  Brian points out the nearly hidden, single layer of green leaf rolled up next to the spicy squid.  "kkaennip" he tells me.  That tiny morsel of leaf balanced deliciously next to the slices of marinated squid.  Its flavor powerful, but not overwhelming... and it leaves each slice of kimbap with a fascinating cleansing aftertaste.

kkaennip is known in English as the perilla leaf.  The Japanese version of the leaf is referred to as shiso.  It turns out that I have had this leaf in many other dishes, including in some of my favorite omakase sashimi pieces at Sushi Seki a few months ago and even in my marvelous cocktail ("groovy") at B-Flat Lounge this past weekend.  I suppose its raw state in the most unexpected places finally properly captured my attention tonight.

Gastronommy's Favorite Kimbap joint
if you have limited access to your own kimbap making auntie or mommy, try this mom & pop hole-in-the-wall:

(between 5th Ave and Broadway)