When being called a celebrity or influencer is insulting


The truth about Michelin. Or rather, here's an opinion I share with Marco (video above). The guide has changed a lot in the past decade and is no longer what it once was. Perhaps it was as a result of globalization and increasingly loosening standards as Michelin became a business instead of a symbol.


But more about today's thoughts: I disagree with his statement about not being a celebrity chef.
He is a celebrity.

Yet, I completely understand what he means – that he doesn't identify with it and all the usual 'celebrity chefs' qualities that give the title a reputation he doesn't want to be associated with. He has actual life skills that brought him to celebrity. I feel the same way about the influencer/blogger label and I often protest the title as well.

Lingyi Xiong, the writer, producer, and creator of Singapore's highest viewed YouTube channel, Wah!Banana has less than 5,000 followers on her personal instagram account (currently). She jokes about the times when fans ask her to hold the camera and help take photos of some of the other YouTube actors. Still, she is the essence of the channel and the brains behind the operation.

I don't think she would get miffed by being called a celebrity, influencer, or Youtuber. But one day when she has hundreds of thousands of followers on her personal accounts... and folks reduce the popularity of her work down to taking cute photos on Instagram, I somehow doubt she'd appreciate that.

Moreso, it's amateur to believe number of followers equates actual influence or is a measure of a brand or person's success, intelligence, or skill in anything besides posting clickbait. Viewership or followers is an important metric, but there's so much more to it (related post: I'm the worst digital influencer)

There are a lot of us who take pride in our work, that there's a certain skill and expertise we've honed over the years, a decade for me; and decades for someone like Marco. (I am not saying we are on the same level, but the heart is the same) He is an internationally renowned chef, but his celebrity is as a result of his actual cooking prowess and a passion he's able to so acutely articulate.

When he's thrown into the bucket label of 'celebrity chef', I imagine he's not impressed by the association with men who made it because they are great on television, men who sought the fame for the cameras and not the craft of culinaire.

Still to this day, I grit my teeth a bit every time someone calls me a blogger. I know there isn't any insult intended behind the label, it's simply a title I don't relate to. 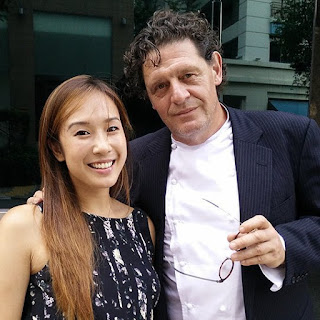