This was written last year, but I just noticed I never posted it on Gastronommy!

It’s that time of year again, when the results of the Diageo Reserve WORLD CLASS are in. 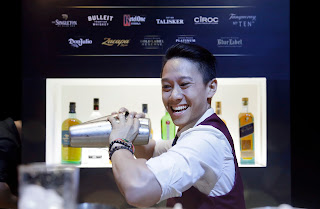 Cocktails have come full circle since the 1860s, birth of the modern cocktail bar. It lost its luster over the course of Prohibition and the 70s sugary disco drinks. But fast-forward to 2014: we are living in the cocktail renaissance, with the idea of the bartender being considered a profession once more. This resurgence respects tradition, yet we also see creative individuals reinventing the classics using modern technology to innovate and push the cocktail scene to new levels.

Celebrating this artisan cocktail culture is the World Class 50: The Definitive Drinking Guide, an online destination featuring some of the finest cocktails around the world made by the world's best bartenders (along with information on where you can try it). The guide was inspired by the Diageo Reserve WORLD CLASS, an outstanding global training program that focuses on the craft of the bartender, helping to build careers in the industry. The program culminates in an annual luxury landmark week where the Diageo Reserve WORLD CLASS Bartender of the Year is announced.

Talented bartenders participate annually in this highly anticipated industry event, going through vigorous regional heats and national finals (Diageo Reserve World Class), before representing their own country at the global final. And tiny as the country may be, Singapore has proudly been represented as a finalist* every single year.
*Finalists: Aubrey Sim (2009), Richard Gillam (2010), Aki Eguchi (2011), Aki Eguchi (2012), Zachary de Git (2013)

This 2014 sees Singapore’s first Singaporean finalist, Peter Chua of 28 Hong Kong Street. Singaporean born-and-bred, Peter made it to the top 6 finalists in the world.

Bartending started off as “just a job” to make ends meet for Peter Chua, until one fateful night when he met the owners of 28 Hong Kong Street and Michael Callahan, the barman who trained him. Over time, he realized the breadth of history behind each cocktail—appreciating that in each drink, such as a single 18-year old bottle takes a lot of passion and patience. It also allowed him another creative output since his days as an aspiring musician. 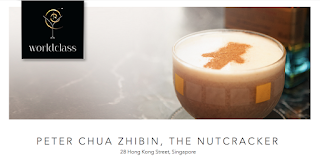 A Tale of Two Martinis: Homage

Peter Chua, the 26-year old musician turned bartender made it to the top 6 finalists in the world. Today, he presents to me one of his winning cocktail duos… A Tale of Two Martinis: Homage. Peter Chua uses Oscar Wilde’s tale of Dorian Gray and a supernatural portrait to describe the logic behind his two cocktails, “As time went on, the Martini, like the main character of The Picture of Dorian Gray, deviated further and further from its former beauty. The Martinez in particular was a beautiful marriage of strength, sweetness and bitterness, a cocktail created by Jerry P. Thomas in 1887. But over time, it transformed into a drink that did not even contain gin or vermouth anymore.” Peter sought to allow the Martinez to recapture its legacy as the ultimate cocktail.

Additionally, Peter noted that today’s guests prefer to have the option of personalizing his drink—no longer are barmen the sole definer of a drink, guests now tell the barman what they want.

“People want dry drinks,” says Peter, “I took that trend and combined it with the fact that people nowadays want a customization of drinks, so I give them a choice between these two martinis.” He notes that the olfactory, our sense of smell, plays a big part in taste—the tongue can only taste 5 distinct qualities, while the nose can distinguish among hundreds of substances—so instead of using a citrus zest as traditionally done with a Martinez, he utilizes edible essential oils for a refined effect. He presents sarsarpilla for a sweeter finish and thyme for those who prefer a savory note.

“My drink was very simple compared to everyone else, but the competition was intense,” describes Peter. On the first day of the rigorous 5-day competition, he saw his fellow 49 competitors bring in all sorts of items from chocolate pebbles to dry ice, “But despite all the talent there, it went from 50 to 48 people on the first day, and by the third day it was down to 16.” Making it to the top 16 was his personal goal, but with all the support he was receiving back home in Singapore, he felt further motivated to push on.

Then he made the top 12. As he climbed higher through the competition, the pressure increased, but he felt himself relax more, “I treated each competition like I was just a barman working behind the bar having fun and hoping for the best—it helped the nerves too. Once I made top 6, I was already happy being the first in Southeast Asia to get this far.”

Balance and professionalism was key in surviving the 5-days. “It was an intense competition. You’re rushing for a challenge, and the judges are pressuring you by going up in your face and asking questions. We slept 4 hours a day between the competition and various events going on. It required a lot of self-discipline to not get too loose with the endless supply of alcohol too.” The most rewarding part of the experience for Peter however, was how much he had learned from the judges, his peers, and the country itself.

A city known for its legendary cocktails, London was a particularly exciting location for Peter Chua, who has an appreciation for connecting history to his craft. Diageo Reserve WORLD CLASS also set up a room called the Ketel One Concierge. “Everyone learned a lot; you see all the creations that else around you is doing. The Ketel One Concierge was an awesome room with minibars all over and all the equipment you would ever need just for practice and prep for your challenges. You share ideas and you make new friends,” describes Peter. (There is no way to cheat since recipes were required to be sent in before challenges began) “The cool thing about bartenders is that it’s like an international family. After WORLD CLASS, you realize you’ve built a network—for example, if I ever go to Sweden, I know who to call up and who me around, and if any of them ever come down to Singapore, I’ll be doing the same.”

He bases his Homage on the Martinez, the cocktail known to be the predecessor to the Martini. Peter explains, “Jerry Thomas invented the Martinez; he was the first super rockstar bartender who also wrote The Bon-Vivant’s Companion.”

Peter makes his own adaptation, while staying true to the character of the Martinez. For example, he uses Kirsh instead of maraschino liqueur.

Also inspired by the Negroni, Peter uses the Negroni’s bitter-sweet component to influence his concoction. “The Martinez is not as bitter in its original form, but I wanted to make a drink that I would like to drink!” Peter says.