A Tale of Two Wontons (Singapore)

A Tale of Two Wontons
by Jonathan Toyad (guest writer) 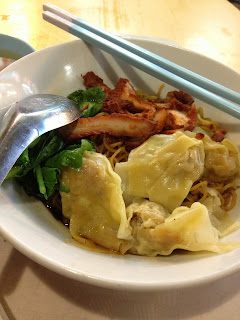 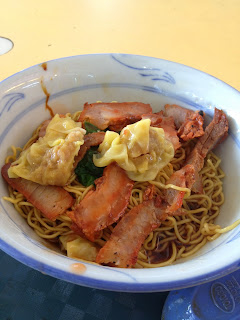 When you think of wonton noodles, you picture simplicity. Simple noodles, simple meat-flavored soup, simple char siew and wonton (or wan tan) pieces – all made by humble hands in the wee hours of the morning. And even with the bustle of lunchtime at the culinary hotspot called Old Airport Road Hawker Centre, the owners still keep a straight face. Because they want to keep the procedure simple: you get your dish, and you’ll love every simple filling over minute of it.

The best kind of wonton conglomeration does not take too long, nor does it take too fast to concoct. Two stalls in particular at the centre, Hua Kee Hougang Famous Wan Ton Mee (that’s how it’s spelled) and Cho Kee Noodle, are situated next to each other at the left-most side of the centre–when facing Airport Road. A drink stall acts as the Berlin Wall pre-1990 between the east and west confederates of wonton noodle mastery, ready to quench your thirst before and after.

Both stalls’ signature dish, the dry wonton noodles with a complimentary bowl of salted soup, are given much loving care by their respective chefs due to their overwhelming generosity of meat, soy sauce, and finely-woven dumpling. Many positive adjectives come to mind when your molars crush the wontons repeatedly into a delicious mulch of dough, pork and garlic, but we’ll go with divine. Or toothsome. 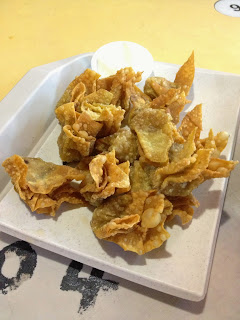 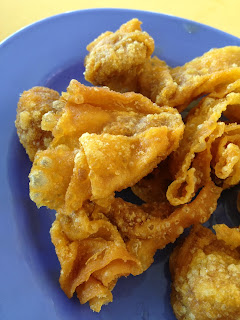 Getting both the soy sauce-laden noodles and mulch together into one glorious union seals the deal for your appetite; a wanton destruction to it, as one might put it comically. You have the privilege of splashing a bit of that salted soup for some moisture, but I suggest that the first bite or two of the dish be in its au naturale state. While both dishes come with a helping of tiny char siu bits from the bigger pieces, Cho Kee Noodles’ offering was more prominent with its chewy numbers. But by a smidgen.

Yes, there are countless Wordpress musings that compare the quality of both stalls and their simple victuals, but in the grand scheme of things is about as productive as comparing Alien and Aliens. Both are great mediums in their own right under their respective creators, each with their own take and technique. Still, if we had a gun pointed to our heads to pick the better among the two culinary grandstanders, we’d have to go to Cho Kee’s sumptuous haven for not skimping on the wonton dumplings in the default S$3 portion. Again, only by a smidgen that will draw attention from the most jaded and detailed of food critics.

You can’t go wrong with either one stall in the end for your wonton noodle cravings. If one stall’s queue is too much for you, and believe me when I say that it can get ridiculous at peak hours, just go to the next. Either way, this is one of those rare occasions where the Highlander rule does not apply. There can, in fact, be two when it comes to getting your noodle-slash-dumpling jollies of the highest magnitude.