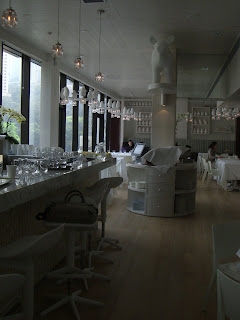 Found some back logged stuff in my drafts!  In March, I included contemporary Spanish restaurant, FoFo by el Willy in my Hong Kong Noms Series.  Following up is a Q+A and FoFo Hong Kong's chef.  Chef Alex is warm and welcoming with his big smile and twinkling brown eyes.  He also has a romantic Spanish accent to boot. 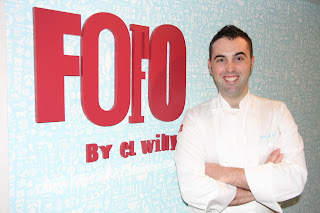 My previous job before FoFo was in Dubai. It was a very big operation, with more than 40 restaurants.  I was running the fine dinning restaurant of the operation.

How did you come across Fofo?  Was there anything that inspired you to lead the way for Fofo Hong Kong?
Back in China, I met "Willy" Guillermo Trullas Moreno; he's an amazing person and chef based in Shanghai.  He contacted me when I was in Dubai and explained all the FoFo projects.  It wasn’t long before I fell in love with the project. Just after two months, I moved to Hong Kong to join this venture.

How do you like Hong Kong so far?
I love Hong Kong.  I moved here two months ago and I love it.  It’s a fantastic city where anything is possible.  I hope that Hong Kong will be my home for a long, long time.

What changes from Fofo Shanghai's original menu have you been making for HK?
We haven’t changed much from the original menu in Shanghai.  The recipes and techniques are the same.  At most, we changed a few dish presentations, but we maintain Willy’s philosophy: good food, good price.

All the dishes in the menu are Willy's creations, but in less than 2 months I feel like they are my creations also.

What differences have you noticed about HK people's tastes compared to Shanghai, Dubai, Spain, etc?
At the moment, we are still learning about the locals’ taste.  I can’t give a detailed answer about their tastes yet, but so far we appreciate that Hong Kong people seem to know a lot about good food.  Hong Kong people are very conscious about health, and things like salt, oil, fat are all very sensitive issues.