I really don't like when people update their twitter/blog/facebook/myspace with constant posts about EVERY.LAST.LITTLE.THING they put in their mouths.  This might seem a bit silly coming from someone who has created a whole damn blog about food, but I've seen people update with photos of the iced tea they're drinking or the remnants of an insignificant granola bar wrapper.  Frankly, I don't care!  Don't clutter my RSS feed or Twitter with that nonsense!  Those of you who are culprit to these habits should just join Eat.ly and leave it there.

I'm mostly just whining--it doesn't actually offend me that much.  I'm just not into keeping strict hour-by-hour food diaries nor do I have any interest in following NYTimes' Sam Sifton's regularly updated food journal (I can't believe some people who religiously follow it sometimes even criticize his eating habits.. cuh-razy!).


However, there are times when I simply have an unusual meal--for better or for worse-- and want to share it on this blog without going into a full fledged review (takes a lot of time: 1+ time visiting, fact checking, chef chatting, putting it off for a month when the timing is better, etc).  In the recent past, I just uploaded photos of interesting eats as I went along, but that's mostly me being lazy and finding an alternative to constantly having to update this blog when I was busy.  But no more of that.

And so, my occasional and sporadic Food Diary begins now! 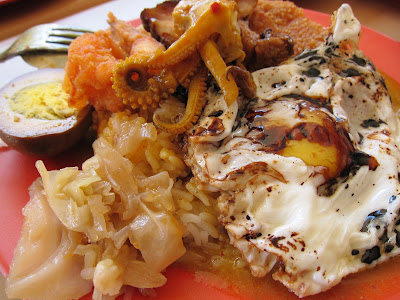 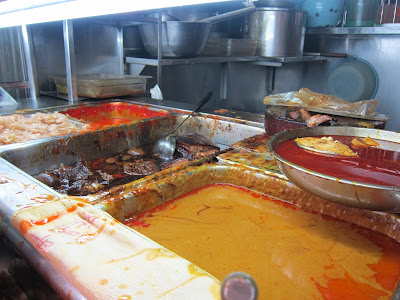 Closing time at 2:00pm after a long hot day.  This probably looks really unappealing to some of you, but I assure you, everything was clean and tasty.

Far far away from our stay in Holland Village, we arrived at Pasir Panjang Food Centre.  Our friend, Guozheng insisted that he knew the best Hainanese Curry Rice stall in Singapore.  I didn't really know what Hainanese Curry Rice was, but I assumed it was the usual white rice + chicken curry usual and nothing more. 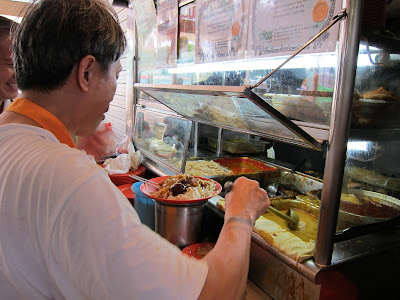 While many Singaporeans are heading home from Zouk at 2am, the Feng brothers are waking up and preparing their stall for a 4am opening. 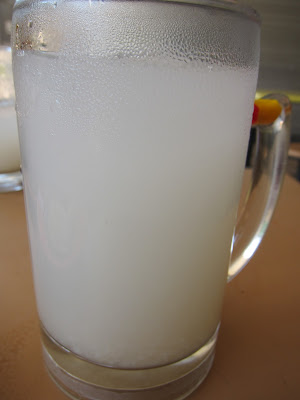 Barley drink, the milky colored beverage is a popular choice amongst local Singaporeans.  I normally go for lime juice, but that day I wanted something less tangy (I love sour flavored drinks) yet still very refreshing.  Barley is that drink.  I love all the soft barley bits at the bottom too! 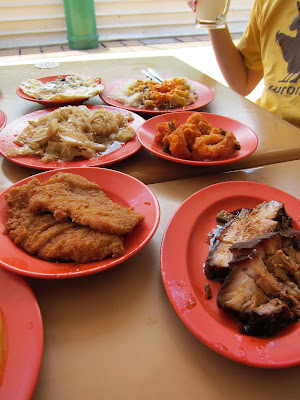 The food comes speedy fast.  We barely get to our seats before Mr. Feng comes by shooting plates onto our table.  I'm surprised at the number of dishes that endlessly arrive.  I originally imagined Hainan Curry Rice to mean a plate of rice and a bowl of curry, end of story.  Instead, our white rice was covered in a generous dose of curry and charsiu sauce, and the equally important numerous dishes that came out. 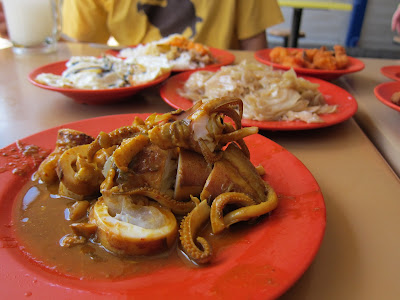 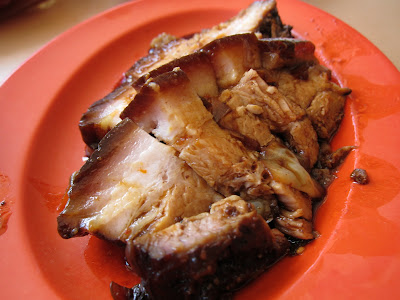 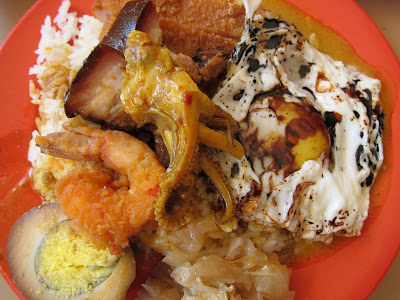 A delicious melody of ingredients on my rice.  Curry is not usually associated with Chinese cuisine...except for the Hainanese, it seems! 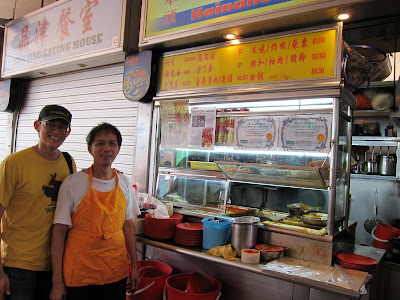 Guozheng and Mr. Feng!  The other Mr. Feng is a bit camera shy and stood off to the side.

Despite our late arrival when the stall was about to close and the blazingly hot day, Mr. Feng greeted us happily and warmly.  Originally founded by Guozheng's grandfather, the stall has been open for over 40 years after he had first immigrated to Singapore from Hainan, China.

It was my first experience with Hainanese Curry Rice as you can tell, but considering the numerous awards posted on their stall and my happy belly, Guozheng may just be right in boasting that this is one of the best Hainan Curry Rice stalls in Singapore!  And as with most hawker stalls in Singapore, the price is shioktastically cheap at around SGD$6 for all of that.

As you can see, there's a "Food Diary" tab that has been added to the site.  I'm having some problems getting my entries to post there separately.  In the meantime, they'll be posted on the regular feed here.