Speak Up. The TED Talk I didn't expect to give. 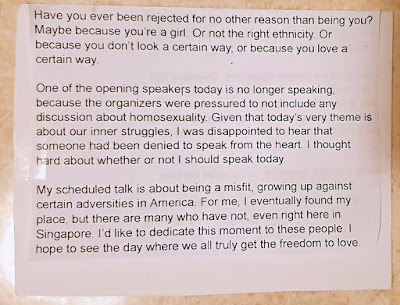 One of the opening speakers today is no longer speaking, because the organizers were pressured to not include any discussion about homosexuality. Given that today’s very theme is about our inner struggles, I was disappointed to hear that someone had been denied to speak from the heart. I thought hard about whether or not I should speak today.

My scheduled talk is about being a misfit, growing up against certain adversities in America. For me, I eventually found my place, but there are many who have not, even right here in Singapore. I’d like to dedicate this moment to these people. I hope to see the day where we all truly get the freedom to love."
- Victoria Cheng


I added a new cue card to my TED Talk and sprung an unscheduled introduction as I walked onto stage. As you'd might expect, it won't be uploaded on any official platforms. The backstory to this: Joshua Simon announced the night before our TEDx Talks that he suddenly wasn't speaking anymore. He wouldn't say why, because he didn't want to take away from the rest of our moments on stage.. That's just the kind of guy he is. But something felt wrong; he and I were sharing our stories with a mutual mix of excitement and stress leading up to this Talk, until just hours before this announcement. I prodded other sources until I found out why.
How do I explain the kind of rage you feel when an injustice has occurred before your very eyes. How could I continue to give my talk about misfits, about facing bullies and shame, about having courage.. when this was happening right here, right now? What had gone from a predictable night of resting before an ordinary TED Talk turned into something else.  I saw only two options: Drop out in solidarity... Or once the mic was on me, to speak up.
I chose the latter. For various reasons, including that the organizers who invited us to speak WANTED us to share these stories. But they were pressured, and caved. Someone needed to speak up and tell the truth.
I believe in the freedom to love, especially the freedom to express this love. But honestly, when the moment came to speak, I was scared. It's crazy that I was scared to say a simple statement about basic human rights. But thanks to the support of confidants who also share this anti-bullying sentiment (Rozz Lee, Paul Foster, Mark, Laibond, Athalie, Kym and others).. These are people who I know who would do the same.
This call to truth and freedom to love isn't about me, but I also feel it's important to share the process of speaking up. It isn't always easy, and indeed there are consequences over seemingly small things. Do I think that risk is worth it? Yes. Absolutely. Never underestimate the power of your voice for the right cause. Speak Up, Singapore.

Lastly, thank you Josh for not allowing anyone to censor your story, even if it meant giving up (for now) your dream of giving a TED Talk. I think what you're saying now is infinitely more important.